DROUGHT IN THE GREATER HORN OF AFRICA 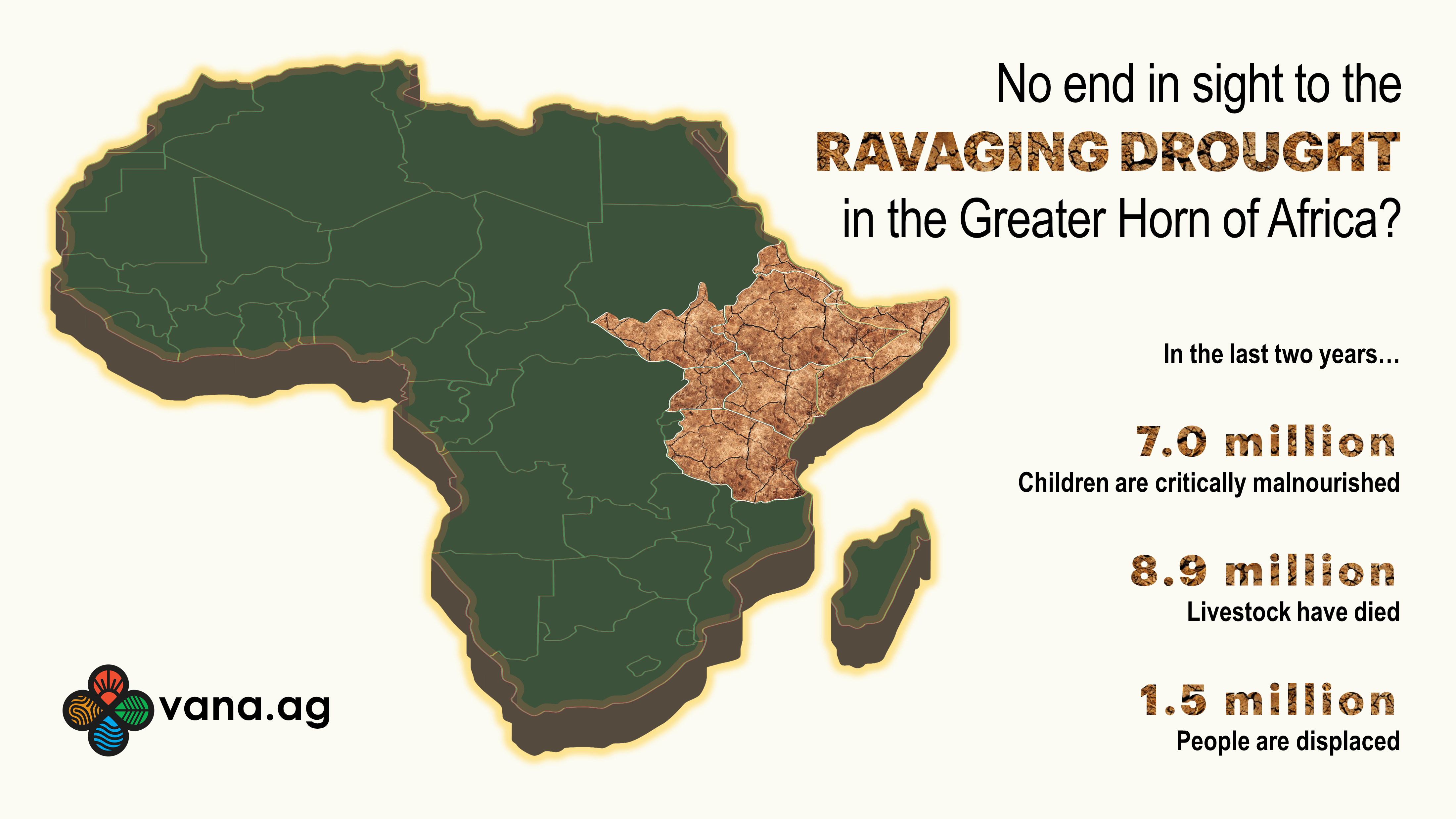 NO END IN SIGHT TO THE RAVAGING DROUGHT IN THE GREATER HORN OF AFRICA?

The Greater Horn of Africa includes the territory of East Africa which stretches from Eritrea in the north, through Ethiopia and Djibouti, to the southernmost tips of Kenya, and Somalia, and parts of South Sudan, Uganda, and Tanzania. The region is on the brink of an unprecedented humanitarian catastrophe as it is going through one of the worst droughts in the last 40 years. Since late 2020, the Greater Horn of Africa has experienced five consecutive failed rainy seasons, worsening the drought and affecting most of its population. The drought depleted the soil moisture, dried the waterways, and left millions of livestock dead.

Earlier research suggested that 2016 was the driest year in the last four decades. The 2016 drought occurred after a particularly intense El Nino event, during which warmer and cooler water patterns in the Pacific Ocean changed, impacting the Indian Ocean and eastern African rainfall. Ethiopia, Somalia, and Kenya received 40% less rainfall between August and October than the long-term average. But the drought in 2020 surpassed this and turned out to be the worst drought ever experienced.

Millions of people are facing acute hunger due to drought compounded by years of conflict, instability, and rising international food and fuel prices due to the impact of the COVID-19 pandemic and the Russia-Ukraine War. There is widespread uncertainty over the Greater Horn Region’s (GHR) future, with this prolonged humanitarian crisis threatening its food and water security for the next few years. According to a recent study by the Intergovernmental Panel on Climate Change, global warming will have a detrimental impact on the food systems in the area by shortening the growing seasons and increasing water stress.

As per global estimates, the drought in East Africa, would have affected over 36.1 million people by October 2022. This includes 24.1 million in Ethiopia, 7.8 million in Somalia, and 4.2 million in Kenya.  The number of people affected by the drought has risen dramatically since July 2022, with an estimated 19.4 million affected individuals, indicating a more significant impact in the region. According to the US government's Humanitarian Information Unit (HIU) and the United Nations High Commissioner for Refugees (UNHCR), there are around 7 million critically malnourished children in the GHR, and 1.5 million people are displaced. At least 8.9 million livestock have died across the region, which pastoralist families rely upon for sustenance and livelihood.

The interrelation between climate, food security, and conflict is more prominent in fragile and developing countries. The extreme drought highlights the region's vulnerability to climate- related threats, which are anticipated to worsen. The drought has severely impacted agriculture, leading to significant declines in food production due to poor harvests. The UN reported that the drought caused an increase in the price of an average food basket by 36% in Somalia and 66% in Ethiopia, making it difficult for many people to buy even essential commodities. Although countries such as Ethiopia and Kenya have made progress on key development metrics over the past decade, the intensifying climate crisis has fostered new vulnerabilities and exacerbated insecurities, destabilising the Horn.

Hydro-meteorological and Early Warning System (EWS) services can aid in reducing the negative impacts of such calamities. To improve the availability and accessibility of these services, many projects are being introduced to enhance the capacities of the regional and national institutions for effective EWS and climate services. The world is now facing one of the direst needs and greatest opportunities, at the same time: to protect the Greater Horn of Africa and set a precedent in collective action and compassion, for posterity.