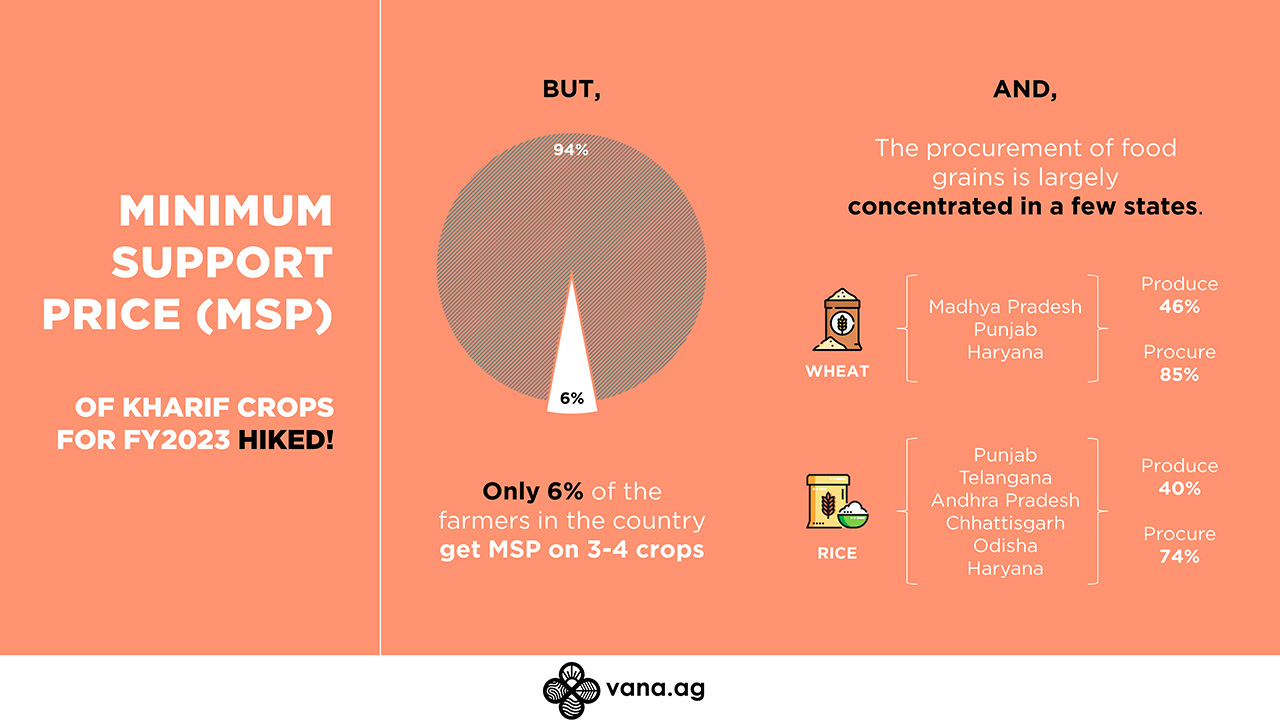 With the onset of monsoon, the government increased the Minimum Support Price (MSP) for all mandated Kharif crops for marketing season 2022-23. MSP is the market intervention by the Government of India recommended by the Commission for Agricultural Costs and Prices (CACP) to ensure remunerative prices to the growers for their produce against a sharp fall in farm prices. Certain factors like the cost of production, input-output price parity, demand-supply, trends in the market price, international price situation, changes in input price, etc., are considered for formulating the recommendation. The current MSP and procurement support policy was designed for cereals during the age of the Green Revolution, which requires practical advancements in recent times.

Recently, the rate for 14 Kharif crops has been hiked, ranging from 4% to 8%. As per the government, an increase in MSP for Kharif crops in the Marketing Season 2022-23 is in line with fixing the MSP at least 50 per cent over the All-India weighted average Cost of Production. But it is essential to know how the MSP is being calculated. The farmers demanded a law guaranteeing MSPs to be computed using the M.S Swaminathan report, including the C2 formula of calculating the cost of cultivation which involves the imputed cost of capital and the rent on the land to give farmers 50 per cent returns, rather than a narrower measure that considers the all paid-out expenses incurred by a farmer and the value of family labour (A2+FL). However, the government uses the more limited A2+FL standard to calculate MSPs. Several reports recommend that the Union government pay MSPs for farm produce using a broader estimate of cultivation costs than the currently used one. But at the same time, economists mince no words stating that legalising MSP would disrupt the market equilibrium, drive out private traders, lead to inflation and result in farm disequilibrium.

The present hike comes against spiralling input rates, mainly due to the sharp soar in global fertiliser and feed rates. The hike was announced when the government is struggling to procure crops in the wake of high demand because of global supply disruption. Even if the government claims that the hike in MSP will benefit the farmers, the output sold by households under MSP ranges from only 0 to 24.7%. According to a survey, only a small proportion of the farmer households sell their produce to government-run procurement agencies, even if they are aware of the MSP and the procurement agency. At the same time, a larger share of surplus produce is sold in open markets since they are getting better rates. But it is believed that increasing the prices may also lead to more significant investment and production.