From Farms to Highway – The farmer’s protest in Europe 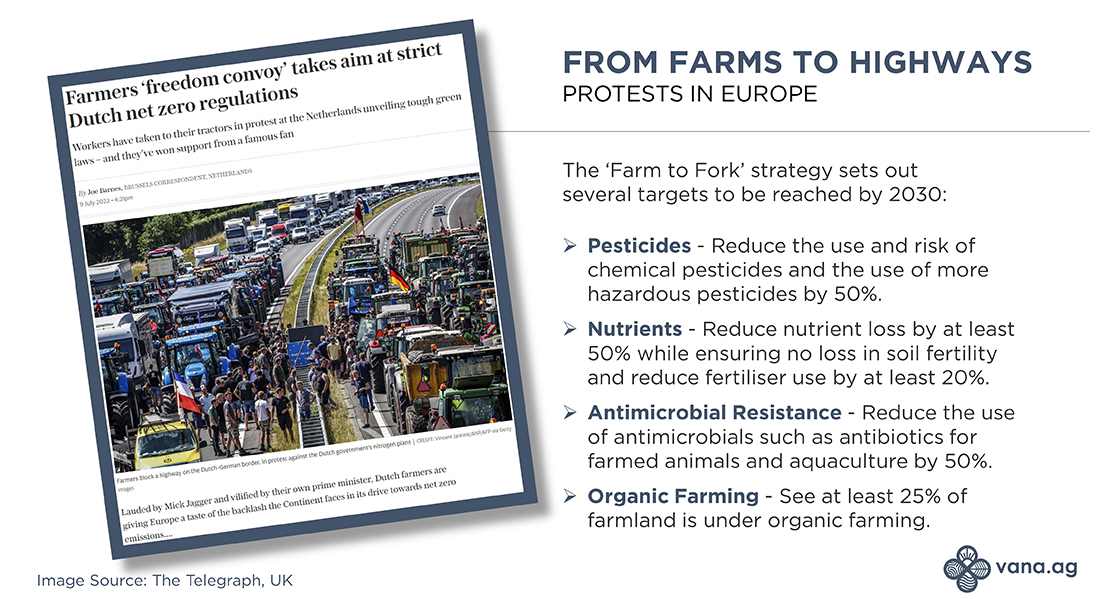 In October 2019, the Netherlands saw one of its most intense protests. Hundreds of farmers were revolting on the streets of the Netherlands. As of July 2022, around 40,000 farmers are part of this protest, rapidly spreading across Europe. But why is Europe seeing these agricultural uprisings?

The Dutch economy thrives on agriculture, with its dairy farms, crop fields and greenhouses. Despite being a small nation, the Netherlands ranks second in the world for agricultural product exports and has one of Europe’s highest concentrations of livestock. However, due to high-intensive farming practices and large numbers of livestock on limited land areas, the Netherlands has long struggled with issues of nitrogen and ammonia emissions, becoming one of Europe’s major polluters. Nitrogen oxides play a significant role in air pollution and contribute more to the greenhouse gas effect than CO2. Ammonia emissions have been found to be climate sensitive as they cause damage to forest and aquatic ecosystems and other vegetation. Now, the government wants to reduce the emissions of pollutants, primarily nitrogen oxide and ammonia (found mainly in the urine and livestock faeces), by 50% by 2030 and improve the quality of air, water, and land. So, they imposed several restrictions on using fertilisers for agriculture and animal husbandry.

Following this, the farmers started demonstrations in 2019 and are still protesting in the agricultural heartland of the central Netherlands against the government policy that mandates farmers to use less fertiliser and reduce their livestock numbers. According to the government, a 30% reduction in livestock is required to reduce emissions of nitrogen oxides from farm animal waste and the use of ammonia in fertilisers. In the past, to reduce ammonia emissions, the government had urged the farmers to feed their animals a less protein-rich diet. The government has published a map with reduction targets across the country based on proximity to areas designated as part of the EU’s Natura 2000 network of vulnerable and endangered plant and animal habitats. The 27 member states collectively account for 18% of the EU’s land area and 8% of its marine territory in the Natura 2000 network of protected areas. Therefore, the emissions must be drastically reduced in areas close to nature that are part of a network of protected habitats for endangered plants and wildlife stretching across the 27-nation European Union. And if the farmers do not adopt the policy, some farms might be forced to shut down.

The new policy will levy high penalties on ammonia pollution. Hence, the cropping pattern must be changed in agriculture. Considering this, the farmers have started protesting, saying restrictions are not imposed on other sectors emitting large amounts of harmful gases. To help tackle the problem, the ruling coalition allocated EUR 24.3 billion (USD 24.38 billion) to finance the reforms that will likely force farmers to reduce their number of livestock or eliminate them drastically. The government also granted funding of EUR 60 million (USD 60.2 million) for a programme to compensate pig farmers who will cease their operations.

Farmers from Germany, Italy, Spain, and Poland have started protesting against the “anti-farming” laws, and the campaign is quickly spreading throughout the EU. To comply with EU regulations, the farmers fear that their governments will try to impose similar climate measures on them, which they claim would endanger their livelihoods and upset the world’s food supplies.