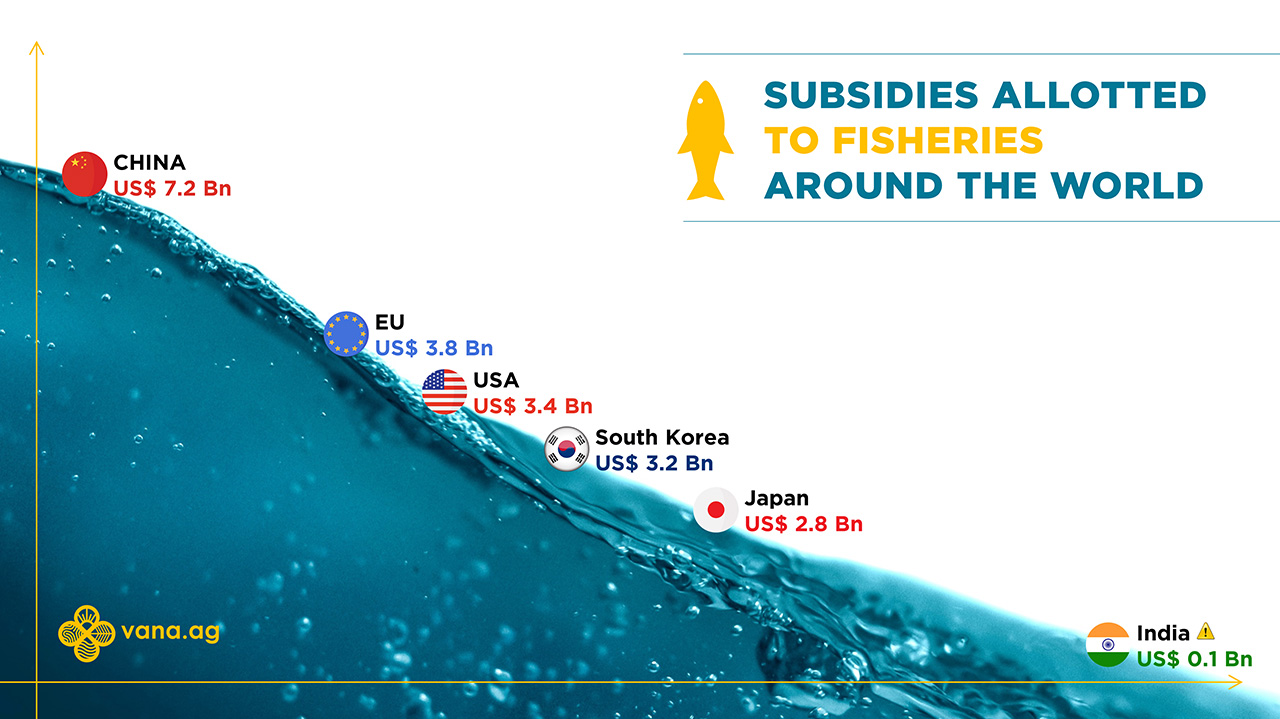 The UN Food and Agriculture Organisation reported that fish stocks risk collapsing in many parts of the world due to overexploitation. It is estimated that 34% of the world’s assessed fish resources are overfished (exploited at a pace where the fish population cannot replenish itself) compared with 10% in 1974. Overfishing can wreak havoc on marine ecosystems and upend a vital link in the food chain supporting humans and other species. Roughly 39 million people depend on capture fisheries for their livelihood. Declining fish stocks risk coastal communities relying on fishing and threaten to worsen poverty. Fish typically meets 20% of the animal protein demand, emphasising the importance of water bodies for food security.

A fisheries subsidy is an action taken by the government to give consumers or the fishing community financial support in order to boost their income or reduce their costs. It is broadly classified into 3 categories: 1) Beneficial Subsidy- Usually in the form of financial investments in natural resources of the country or other methods of management that control the fisheries with the ultimate objective of enhancing national fish populations. Managed Fisheries, Fisheries Research & Development, and Marine Protected Areas (MPA). 2) Capacity Enhancing Subsidy- It may be provided directly to increase the fishing capacity in the form of fuel subsidies for vessels engaged in fishing activities or subsidies for port development, boat construction, and renewal and modernization, infrastructure for market and storage, non-fuel tax exemptions, and fishery access agreement. 3) Ambiguous subsidies- Primarily include subsidies that affect the environment in unspecified ways. Fisherman assistance, vessel buyback and development of the local fishing community.

Global fisheries subsidies are estimated to range from USD 14 billion to USD 54 billion per year to support the fishing sector, accounting for roughly 20% of the total value of all marine fish captured at sea and delivered to ports.

Contrarily, India proposed WTO on retaining the subsidies considering Common but Differentiated Responsibilities (CBDR) for developing countries by taking a stand on phasing out subsidies rather than a complete ban. The existing subsidies will protect poor fisherman’s livelihoods and address the broader food security concerns. India wants complete exemption from subsidy cuts for artisanal and low-income fisheries at least 200 nautical miles (NM) and not till 12 NM as mentioned in the current policy. India demands this exemption to be in place for at least 25-year from the prohibition on overfishing subsidies for developing nations that do not engage in far ocean fishing to combat the problem and to come at par with the developed nations.

Following this, at the 12th Ministerial Conference (MC12) the governments agreed not to provide subsidies to fishing vessels and operators that have been found engaging in IUU fishing, fishing of fish stocks that are in an overfished condition, and fishing-related activities on the high seas that are outside the competence of a regional fisheries management organisation.